32nd Anniversary of the ADA

Come celebrate the season with us! The 32nd anniversary of the ADA will be celebrated on July 28th from 11

Check out some of the photos from our recent Healthy Food Choices event! 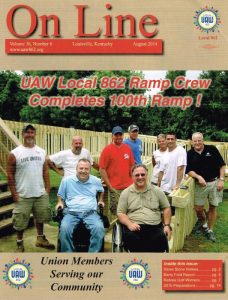 Before Thomas Wheatley received a ramp, leaving his Jeffersontown home with his wheelchair or walker was so difficult he only left for doctor appointments. His ramp was the 100th built by volunteers from Ford and UAW Local 862, who have been building wheelchair ramps for Louisville residents since 2012.

Wheatley says he can now leave his house more easily. He enjoys when his grown son takes him places. “We like all sports, especially University of Kentucky. I am a die-hard fan.”

Todd Dunn, president of UAW Local 862 said the project originated about three years ago when some of the carpenters from the Ford Assembly Plant decided to build a ramp for a co-worker who had been diagnosed with cancer.

Two years ago, Ford and UAW Local 862 began working with CAL in a ramp-building collaboration. The Center currently has 225 people on its waiting list. Volunteers continue to build and plan as long as funding is available.

The ramps can cost up to $3,500 if paid for out of pocket, said David Allgood, director of advocacy at CAL. When the initiative began two years ago, Ford and UAW Local 862 donated $50,000 to cover the cost of materials for about 25 ramps. Last year, members of Louisville Metro Council contributed an additional $60,000.

Margaret Reynolds, 65, of Hazelwood, said before the Ford and UAW Local 862 volunteers provided her with a ramp in May, there was a two-month period where she only left her house 6 times.

“I became severely depressed because I had to depend on other people to do things for me that I wanted to do for myself,” said Reynolds, who uses a wheelchair. “The first time I rolled down that ramp….it was like a bird had been released out of a cage.”

Now, Reynolds says she is “wearing out” the new ramp. She is doing some acting and is able to volunteer as a foster grandparent. She even attended the Kentucky State Fair. “It’s independence,” she said.